Other suggested birth times for the same birth date from unverified sources are: 9:35 AM and 12:09 PM.  But after comparing them against each other with his life experiences, 10:58 AM birth time, perhaps, seems to be closer to his actual (but still unknown) birth time.

The analysis is based on the sidereal zodiac system with Placidus house division, and the method of interpretation is mostly according to Vedic astrology.

The following figure (the north Indian style diamond shaped chart) shows his natal chart (the one on the left) and the corresponding Navamansha (ninefold) chart on the right. The twelve houses are shown with roman numerals, and the numbers (1 through 12) represent zodiac signs from Aries to Pisces. The planets are placed in their corresponding zodiac signs with degrees and minutes.  Since the analysis is based on the Placidus house division system, the house disposition for each planet is shown with arrows when they belong to the adjacent house.  For example, the Pisces Rahu with Pisces 5 degree and 18 minutes, belongs to the fourth house since the fifth house cusp (the starting position of the house) is at Pisces 7 degrees and 8 minutes as listed in the lower left House Cusps table. Similarly Virgo Sun, Virgo Mercury and Virgo Ketu belong to the tenth house as indicated by arrows.  When arrows are ignored, you get the “Whole” house traditional chart. 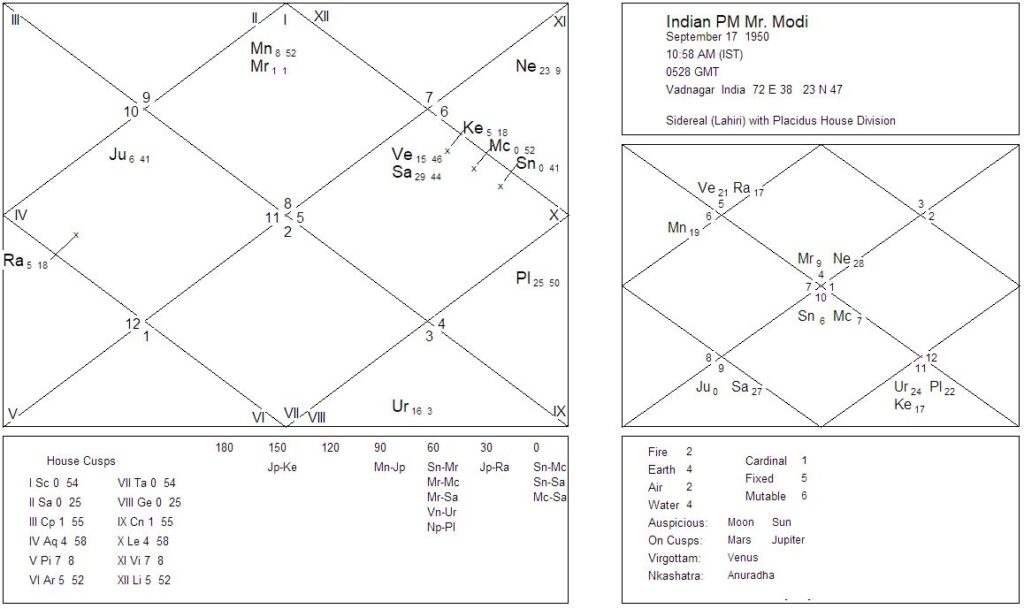 Mr. Modi was fittingly born under the Scorpio ascendant (rising sign) as an intensely passionate person, starting his life with nothing and achieving everything in his life on his own with almost nobody’s help.  Scorpio born generally love challenges, especially difficult challenges, because overcoming those difficulties when the odds are all against them, they truly strive on beating those odds. Mr. Modi is very independent, has strong convictions, very focused, never lets up, and maybe perceived as a crazy lunatic.  The most significant planetary configurations in his natal charts are:  Sun-Saturn, Saturn-Mercury and Sun- Mercury close conjunctions in the 10th house; Moon and Mars in the first house and Jupiter in the 4th house.

The first and the sixth house ruler, Scorpio Mars resides in the first house right on its cusp and in its own sign.  This Mars in the first house makes him very energetic, strong, in early part of his life very impulsive, insistent, impatient, ambitious, aggressive, confident, determined, hardworking, extremely independent, sometimes arrogant, loves power, a true political leader, authority, healthy, self confident, being in Scorpio secretive, emotional (water sign), mystical and has potential for being a spiritual.

Along with Mars, debilitated Scorpio Moon in Anuradha Nakshatra also resides in the first house.  Although this Moon debilitated being in Scorpio, due to its disposition in the cardinal (first) house and strengthened by friendly Mars, a Neech-Bhanga (cancellation of Debilitation) Raj yoga is produced making the Moon almost equivalent to her exalted status.  Moon being in Anuradha Nakshatra, a symbol of lotus flower, his basic inner impulse constitutes a sense of righteousness producing harmony and good social relationship. Anuradha also represents soul’s thrust for union with the Source. Being the ruler of the ninth house, the first house auspicious Moon practically guarantees him good health, lively and  charismatic personality, makes him compassionate, sensitive, gentle, well mannered, sharp, smart, loving, caring, lucky and religious.

The second and the fifth house ruler, Aquarius Jupiter, in the fourth house makes him intelligent, philosophical, happy or tendency to find happiness even under challenging conditions. If one considers the planetary placement of only  Mars, Moon and Jupiter in this chart, this person would be destined to be a philosopher, spiritual leader or a social activist.

Then why is he in politics?  The answer lies in the planets influencing Jupiter.  As you we will see later, the political planets: Saturn, Sun,  Mercury and Mars together bring very different energy to this chart.  The malefic first house resident Mars and malefic tenth house resident Saturn, Sun and Mercury aspect (Drishti) Jupiter, indicating the life experiences for this person to be strongly influenced by the malefic planets to fulfill his destiny.

There are five planets in the tenth house. And they are:

The third and the fourth house ruler, Leo Saturn, in the tenth house. It means he is a successful achiever despite taking a long time, hard work, perseverance to achieve his goal, ambitious, egoist, shrewd, sometimes ruthless (the fire sign), likable, respectable, high political stature and popular. He will be remembered long after he is gone.

The ruler of the tenth house, the auspicious Virgo Sun, is perfectly placed providing him the political and social power and prestigious positions and aspiration to become the one of the most powerful person in the world shaping the new world order.

The ruler of the eighth and the eleventh house, exalted Virgo Mercury, although combust, being exalted, provides the Virgo Sun, all of its positive qualities and energy, making the Sun far more powerful than otherwise.  Being the ruler of the eighth house, occasional financial ups and downs, friction with cabinet members and political figures are likely.  However, the powerful trio of Sun-Saturn-Mercury conjunction in the 10th house outweighs the challenges making him tremendously successful in politics with many achievements both domestically and internationally.

The Virgo Ketu in the tenth house and Pisces Rahu in the 4th house forms the karmic axis in this chart, and most of his life challenges and crisis revolve around this axis.  Occasional political setbacks, no family life are some of the symptoms of this axis.  However, the tenth house Ketu is spiritual for him being associated with Saturn.

The Gemini Uranus in the eighth house makes him extraordinarily intelligent, but it can also cause financial crisis as well as family crisis.  It isolates him from family life (a part of his destiny’s plan).

The Virgo Neptune (which conjuncts Mars in the first house in Navansha chart) in the eleventh house makes him extremely talented and shrewd in politics when it comes to deal with his counter-parts both domestically and internationally. However, he is likely to have very few friends, Neptunian deception plays important role in dealing with people around him. Since Neptune being the only planet that aspects the fifth house, it provides him with tremendous spiritual energy at the expense of denial of family life and children.

The Cancer Pluto in the ninth house provides him additional support for his spiritual quest when spiritual planets become activated during their respective Dasha cycles.

Presently Mr. Modi is under major cycle (Maha Dasha) Moon, intermediate cycle (Antar-Dasha) Venus, and sub-cycle (Vi-Dasha) Venus.  His previous intermediate cycle was that of Ketu (until approximately by the end of August 2019).  There is only one planet in the constellation ruled by Moon and that is Neptune.  Neptune being spiritually very auspicious and powerful due to its 11th house placement in natal chart and the first house placement conjuncting powerful material Mars in the navamansha chart, their combined influence of balancing the material and spiritual success in a very meaningful way. This manifestation of this combined energy has been active since October of 2011 and it will continue till October of 2021.  So until then I expect him to enjoy this wonderful journey of material and spiritual success with lots of achievements. As a rsult, it is not surprising that India is likely to bigger a big player on the world scene recognized and praised by the entire world.